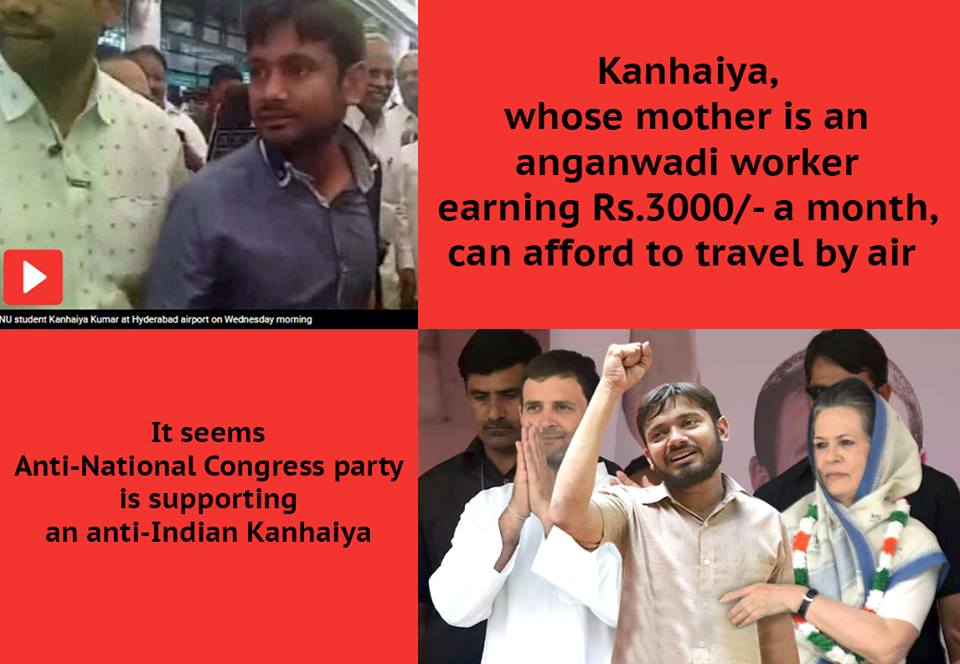 Sponsored the flight and accommodation to JNUSU president

The JNUSU president, Kanhaiya Kumar visited Hyderabad University on the directions of his new boss, Rahul Gandhi who is behind the making of Kanhaiya.

Kanhaiya visited the varsity on the directions of Congress so that the dalit scholar’s Rohit Vemula suicide could be properly politicised as Kanhaiya has emerged as a notorious personality in the country after the JNU row.

The JNUSU president Kanhaiya Kumar recently met the vice president of Congress, Rahul Gandhi at his residence in Delhi. Rahul had confirmed the meeting with Kanhaiya on his Twitter also. 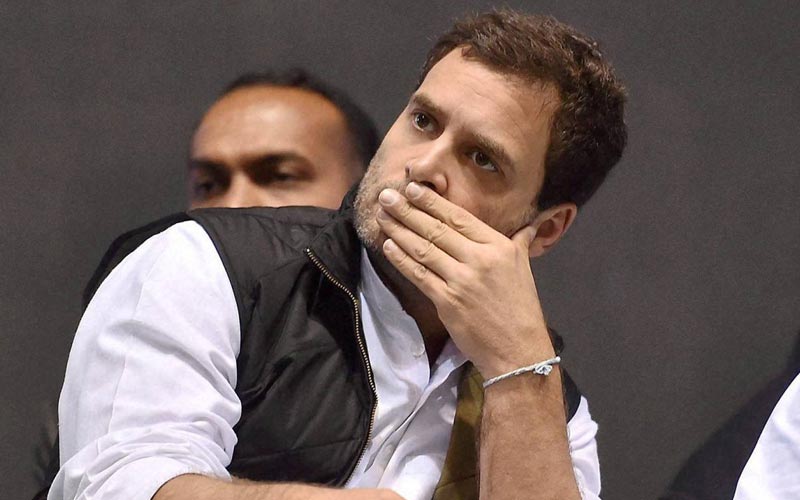 The rival of Congress has termed the visit of Kanhaiya, a sponsored visit by Congress so that the anti-national feelings could be spread among the country men.

BJP launched verbal attack on Congress and said the dalit scholar had committed suicide because of the anti-dalit policies of the Congress. The party’s national general Secretary, Shrikant Sharma told the media, “It is the policies of Congress government which led to so many suicides in Hyderabad Central University, including that of Vemula. Our government has taken measures to ensure that corrective action is taken. Now Congress is trying to deflect attention from its failure by allying with a person accused of anti-national acts,” party National Secretary Shrikant Sharma said. Nine students before Vemula had also ended their lives at the university, he said.

Kanhaiya along with the other members visited Hyderabad and the entire tour was sponsored by Congress. Moreover, the air ticket was also gifted by Rahul Gandhi to the JNUSU president. One cannot believe that a person whose father is paralysed and mother earns Rs 3000 per month can afford an air ticket from Delhi to Hyderabad which costs around Rs 15,000 approximately. 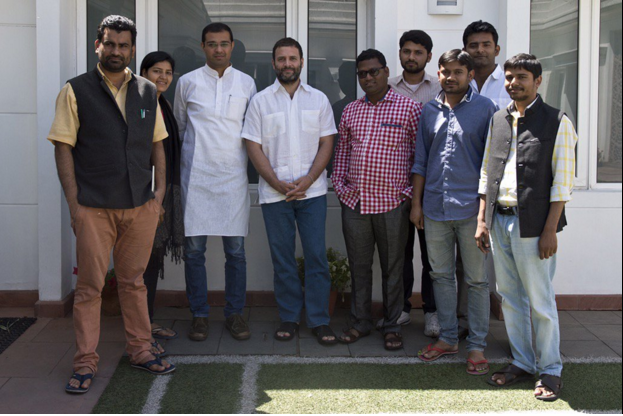 The vice president of All India Congress Committee who is also famous as Pappu Gandhi has shown his anti-national qualities openly. The Yuvraj of Congress was eagerly waiting to meet the JNUSU president who had shouted slogans against the country.

Even Gandhi had supported the protest of JNU students in favour of the students who are facing the sedition charges.

As per the information, the JNUSU president Kanhaiya Kumar met Rahul on Tuesday and other students’ union office bearers also accompanied him.

Courtesy call for traitors by Congress

The anti-national Congress termed the meeting as Courtesy call. It means the party would give more courtesy calls to those who would shout slogans against the country.

On the directions of Rahul, the meeting was arranged by the National Students Union of India chief, Roji John.

John was also present during the meeting. John told the media, “They thanked him (Rahul) for his continuous support. He not only supported the students at JNU, but also FTII and IIT Madras, where students have been protesting against the way government is attacking institutions. We will continue this fight to protect autonomy of institutions,”

Rahul in a tweet said, “Met a delegation of student leaders from AISF and JNUSU President.” The Pappu visited the JNU campus on February 13, a day after Kanhaiya was arrested in a sedition case over an event on Parliament attack convict Afzal Guru.

The sources revealed that Rahul met Kanhaiya only for discussing the politics. After the prominence of JNUSU president in the country, Rahul want to strengthen NSUI wing in the prestigious university of the country. Even he has offered a position to Kanhaiya in the party fold. The meeting of the vice president with the student facing the sedition charges proved the anti-national ideology of Rahul.