The factionalism and internal rifts of Congress party are not hidden from anyone and this is known to be one of the major reasons of Congress’ downfall on the political ground. This is not a new “trend” in Congress when one member would blame other for all the wrong doings. In this battle of blames and lies, Captain Amarinder Singh seems to be taking all the “benefits”. He does not look worried due to these rifts at all, but is constantly trying to turn these internal rifts beneficial for him.

We can do better analysis on the situation by taking the example of Gulchain Singh and Shakeel Ahmed. They were not the strongest contenders but were still given powerful positions. The reason was their “close links” with the royal Singh. Harish Chaudhary, another member when tried to make his point was treated badly in the party, as Captain Amarinder Singh never wants to transfer his powers to anyone else.

Also, as per sources, when Pratap Singh Bajwa was the president of Congress, Amarinder left no chance to take his position and wrote a letter to Mrs. Gandhi saying that bajwa is a “drug lord”. Not just that, when there was doubt of making Mr. Singh, the president of party, he threatened the high authorities to form a new party of his own, after which he was granted the “president” position.

If we look at the recent incident of welcoming Asha Kumari in Punjab, sources claim that this happened because of the Captain himself. He wanted to take charge of the party hence appointed Asha Kumari here.

From all above-mentioned incidents, it is clearly exposed that what Captain craves the most is power and charge. He would never allow someone else to take his position.  But here we would want to remind Captain Amarinder Singh that “TEAM WORK” is a practice that is important to accomplish any project, so you better learn it.

15 August, Independence Day, is the day of celebration as we Indians got independence on this date in the year 1947. But as this date is coming closer, it is increasing the “nervousness” of the Punjab Pradesh Congress Committee President, Captain Amarinder Singh. The reason is nothing but the own party member of congress Punjab, Jagmeet Singh Brar, who has been expelled from the party recently. His harsh tweets and frustration towards Congress party has become the reason of his suspension from the party. Jagmeet Singh Brar did not stop commenting harsh and negative things about the party even after series of warnings, so high authorities finally decided to expel him. He showed his anger by taking the support of social media like twitter and stated the reasons of annoyance. 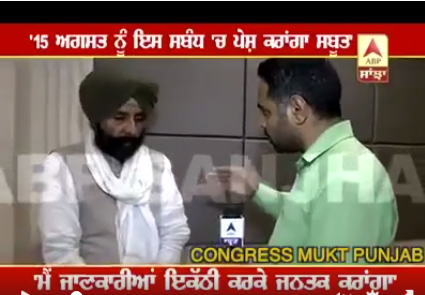 In a recent interview, he said that he has the entire details of Captain Amarinder Singh’s Swiss bank accounts. He claimed that former Cm has more than 860 Crore rupees in the foreign accounts on the name of his son Raninder Singh and wife Preneet Kaur. He added that Captain looted the hard-earned money of Punjabis and transferred the same to countries like Dubai, Switzerland and Pakistan. He has also saved the money under the name of some foreign trust. Sending money to country like Pakistan is purely Anti-National, Brar said.

With these statements, Jagmeet said that he is all set to reveal all the secret information of Captain Amarinder Singh and his family’s Swiss bank accounts. He added that he would do the same on 15 August 5, 2016. So, we all should get ready to celebrate the Independence Day, this is going to be special you know…!!!

Alleged as the main challenger in the forthcoming Assembly Elections 2017 in Punjab, the Congress party is gearing hard to develop a constructive vote bank. The poll elections are less than a year away now, the unit of Punjab Congress party has been striving to turn the tide in its favor. But rather to moving towards progress, it seems to head on a self-destruction way.

The Congress’ chances turn out to be fading in the assembly elections due to the increasing in-fighting in the party. The ministers and members of the unit failed to share a cordial relationship. It has been discovered in the recent rallies and meetings held by Punjab congress in different parts of the state in view to share the party plans with its members or supporters.

The Punjab Congress chief Captain Amarinder Singh himself was ashamed on finding such nuisance and lack of trust among the party members itself. He tried to pacify the environment but no one bothered to pay any heed to him. Such incidents would definitely bring them no win. The tension grips the Congress people.

While the opposition parties take full advantage of the situation and leaving no chance to deface the congress party. Even the appointment of Prashant Kishore, a famous poll election strategist, is not able to unite the team as whole. While trying to give a political makeover to Punjab Congress chief, his own reputation is at stake in the state.

The appointment of Amarinder Singh as state chief by Rahul Gandhi (Vice President, Congress) is not welcomed by every member of the party. Rahul failed to please the disgruntled sections of the party. Next, in an effort to bring balance in PPCC (Punjab Pradesh Congress Committee), Rahul Gandhi put Ambika Soni (former Union Minister) as in charge of Election Campaign Committee. Again this move did not go well with Amarinder Singh.

The situation goes haywire when party leaders started raising petty issues relating to own constituency. The lack of trust and unity ensue the congress unit. A team which is not able to ally its own people than how could it be able to bind the entire Punjab?is a question to ponder upon.

In short, the Punjab Congress has been hurtling from one crisis to another and its leaders are voicing our differently.

Brar lambasted the PPCC President for his wrong attitude 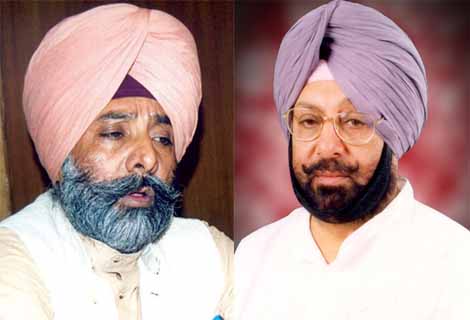 Jagmeet Brar criticised Amarinder against the expulsion of Devinder

The senior Congress leader Jagmeet Brar has criticises the PPCC President for his attitude towards the party senior leaders. He said that Amarinder has been indulging himself in the petty politics with in the party leadership.

Brar tweeted, “Birdevinder singh’s expulsion from party not in good taste, smacks of personal vendetta and Highhandedness by Amarinder Singh.”

He said that the arrogant Capt Amarinder himself thinks about his personal gains and he is against the people who give him the feedback to improve himself. Brar stressed that the party’s high command is aware of the fact that who is right or who is wrong. But, when the entire party is struggling hard to prepare itself for the Punjab assembly polls, why Capt Amarinder Singh is acting like Ahmad Shah Abdali.

Earlier, former Deputy Speaker, Bir Devinder Singh got suspended by PPCC President Captain Amarinder Singh because of a write up spat between the duos. On his suspension, Bir said, “I do not know I have been suspended. If I have been suspended then I can say that Amarinder would have put his sagacity and wisdom at stake while deciding action against me. As my vocal chords had dried up when I canvassed for him in Amritsar, I am sure he would have been pained by this decision. Captain has taken a destructive path and has been destroying himself as well as the party in Punjab.”

Bajwa accused Captain
In a row, after Bir Devinder, now Bajwa is accusing Captain for his oppressive behavior, while he visited Jallandhar with his group leaders and workers for the rally which was being organized by Captain. They were simply ignored by Captain and his team and were not allowed to speak in the rally. Not even a single microphone was given to Bajwa group of leaders in such huge rally.

Not only this, but Captain made fun of Bajwa, saying, “Bajwa is now out of Punjab politics and I am the wholly solely Incharge in Punjab.”

Arrogant Captain
This arrogant attitude of Captain had showed publicly that there is lack of respect and unity between Congress leaders. It would not be wrong to say that the party is divided in the state.

Agitated Bajwa and his group of leaders have decided to brainstorm against Captain for his egoistic and high headed attitude. On the 24th of April, there would be a function by Bajwa group to celebrate the Bajwa’s entry in Rajya Sabha, where they would teach Captain a lesson on clean Politics.

With this kind of leadership, the day is not far when Congress would lose its existence in Punjab.

A day is not far when we will witness differences between the PPCC  President and former CM Captain Amarinder Singh and party strategist Prashant Kishor.

Prediction came as a result of closed-door meeting between Kishor and former deputy Speaker Bir Devinder, which was not disclosed to Captain. As per the sources, Kishor had met the suspended leader where he promised him a more active role in the party. Also, without getting Captain’s ‘go-ahead’ Kishor assured Bir that Amarinder would now bury the hatchet publicly and work in coordination with Bir Devinder.

Bir Devinder notified Kishor that the one-sided communication “is not good for the state Congress ahead of the elections”. Bir Devinder is learnt to have told Kishor that since Amarinder “should not only be more communicative with his party men but also listen to their grievances and suggestions“.

It is worth mentioning here that Bir was suspended from the primary membership of the party for his write up which accused Captain for his dictatorial and autocratic behavior. He had been vocal against Amarinder over his “inaccessibility”, which was not acceptable by Captain.

After Bir, Jagmeet Brar second in a row

After Bir Devinder another senior party leader Jagmeet Brar is Captain’s next target for his recent acts of “indiscipline” to the party high command.

“The case of action had been sent to the party’s high command Sonia Gandhi, since Brar is a member of the All India Congress Committee (AICC), the PPCC cannot technically act against him” said sources.

Kishor met the suspended Bir Devinder without Captain’s consent, which made Captain furious. Amarinder never failed calling the suspended Bir an outsider. “It is a clear message for all including you, Kishor. Internal matters are not to be discussed publicly.” “Such indiscipline in the party would not be tolerated”, Captain further added.

His same dictatorial behavior was seen when he became reluctant to hear any plea of the strategist, when Kishor tried to justify his move.

Congress will be ruined
It would not be wrong to predict Congress party downfall with such autocratic attitude of its chief, Captain Amarinder Singh. In a row, it would be defeated for the third time in Punjab because of simple reason and this is ‘lack of unity’ within party leaders.