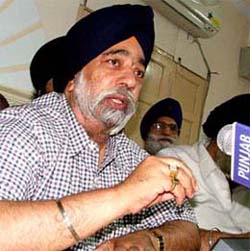 Paramjit Singh Sarna, the former DSGMC president had left no stone unturned to support the anti-Sikh activities. He forgot the Sikh genocide and honored Sajjan Kumar with Siropa. Even he supported Sajjan Kumar’s brother in the elections.

Sajjan Kumar was responsible for the killings of the innocent Sikhs in Delhi during the 1984 anti-Sikh riots. Sarna not only supported him whole heartedly but also honored him. Even he honored the grandson of the notorious Editor Lala Jagat Narayan.

Sarna did not join the protests carried out by the 1984 anti-Sikh riot affected victims. Moreover, he stopped the pension of 1984 widows. He also denied the Akhand Path for the riot victims. He appealed the riot affected families to forgive those who were involved in 1984 Sikh carnage.